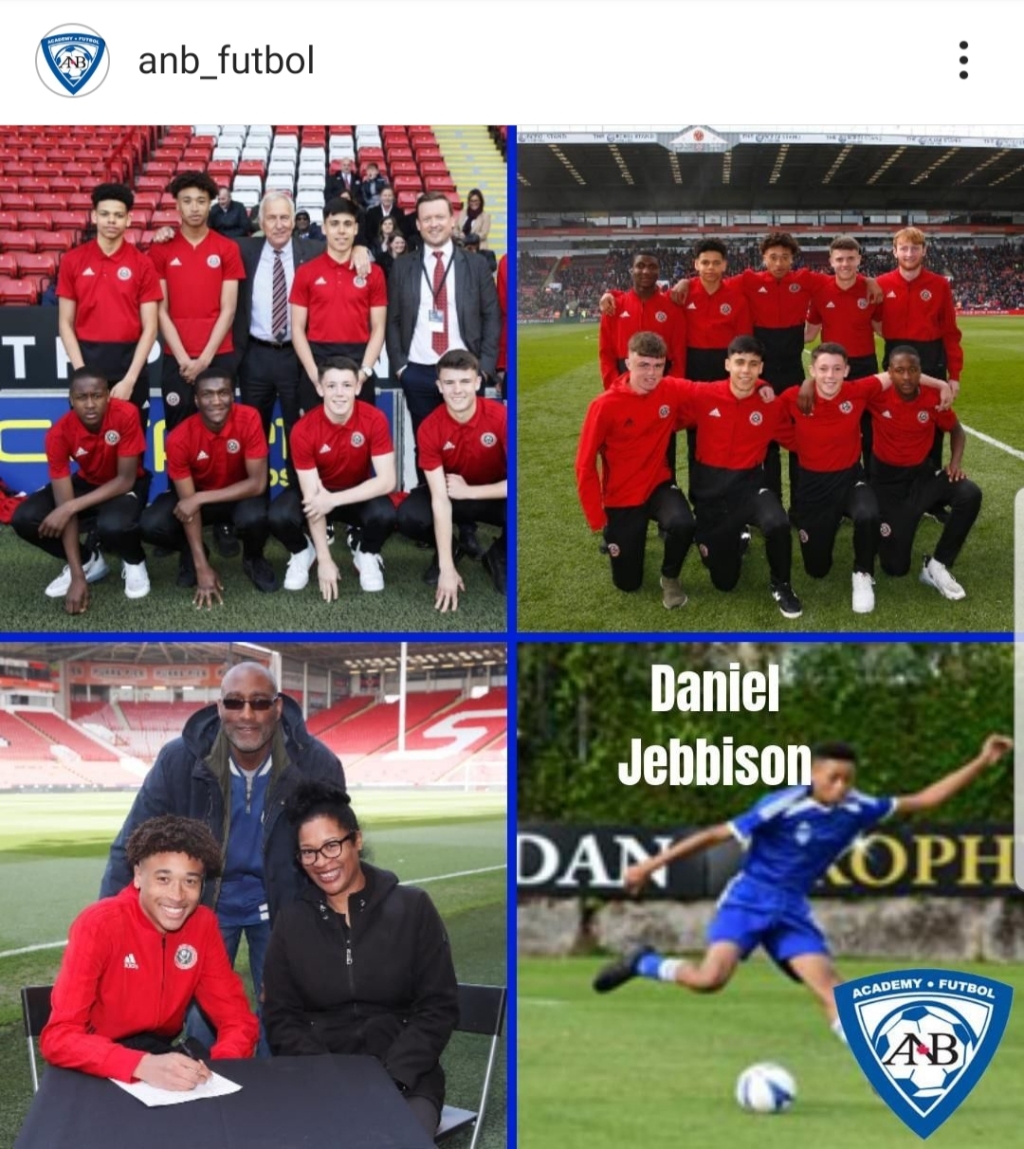 SAAC would like to congratulate ANB academy on their former player Daniel Jebbison signing with Sheffield United Academy. Great work to Bassam and his coaches at ANB for continuing their focus on player development. That is one of the big reasons we do this, to see our young players turn into promising professionals! 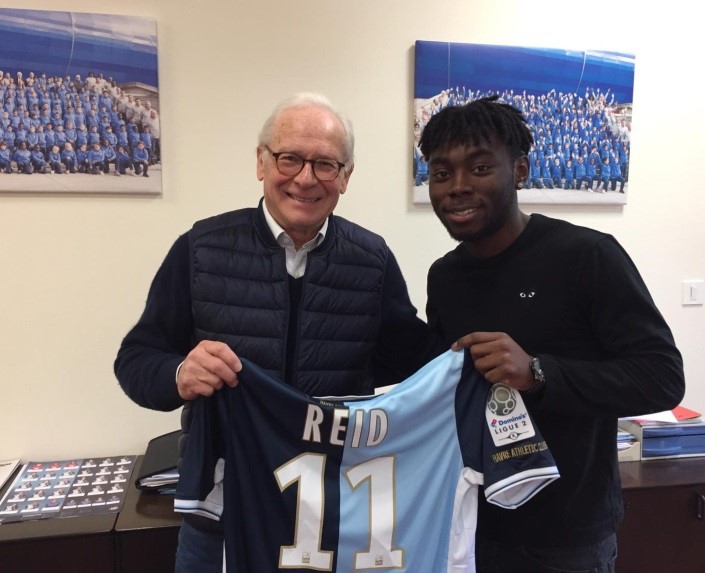 ANB Futbol’s vision is to become Canada’s leading soccer development organization.  Its mission is to identify Canadian soccer talent, and to maximize the potential of players at any level, through professional coaching and training and participation in a standards based inter-academy youth league.

For more information on the programs offered by ANB Futbol, refer to our website at www.anbfutbol.com telephone 905-313-8661, email info@anbfutbol.com

SAAC is proud to recognize the accomplishments of former ANB Futbol player Adonijah Reid who signed a contract with the French Ligue 2 club, HAC Le HAVRE.

Reid (1999 born) was a member of ANB Futbol from the age of 12 to 17.  In early 2017, Reid was selected as one of the first recipients of a Generation Adidas Canada contract with Major League Soccer and was subsequently chosen by FC Dallas in the 2nd round (40th overall) of the 2017 MLS draft.  Over the past two years, Reid was with FC Dallas and loaned to Ottawa Fury (USL).  He has also been part of the Canada Men’s National team program, representing Canada at the CONCACAF U20 tournament in Nov. 2018.  Most recently, he was on trial with HAC Le HAVRE and the club decided to extend a contract based on his performance.

ANB Futbol has a strong relationship with various French clubs, especially HAC Le HAVRE, where a number of young ANB athletes have gone on trial and the club is actively following their progress during their annual visits to Canada.  Reid’s move to France was also facilitated through the work of Stellar Group, his representative agency.

“Adonijah has professional experience in North America and now we will see his abilities against some of the best players in the world.  Le HAVRE has a great reputation in developing players to a highest level.  I look forward to seeing him face the next steps in his futbol career. I only wish him the best!  We would also like to thank his agent, Nicco Roffo of the Stellar Group, Adidas, and Major League Soccer.”

ANB Futbol is a proud founding member of Soccer Academy Alliance Canada  and participates fully in all SAAC standards based, development  venues for youth ages U8 – U13 and the inter-academy competitive venues for young competitive athletes ages U14 – U20. SAAC is entering its 14th year of operations for the 2019 season.  If your dream is to become a world class competitive FUTballer, contact a SAAC member Academy closest to you.

May, 2019 (RELEASE) – Following the success of the annual ANB Futbol ID Camp held in June, 2018, a young Canadian player who attended the camp as a player from Erin Mills Soccer Club, Antony Curic (2001 born) has been offered a one week trial with the French Ligue 2 club, FC Lorient.

Antony is a strong centre-midfielder who impressed the FC Lorient scout during the camp.  Over the past few months, the club has kept in touch with ANB Futbol Academy Director, Bassam Naim, & Atony’s family to confirm the one-week trial opportunity.   Starting on 6 May, 2019, Antony will train with the FC Lorient academy players and participate in trial scrimmages during his stay at the formation centre.

“We are proud to have exposed Antony during the ANB Futbol International ID Camp where many professional coaches & scouts are invited annually.  FC Lorient has a great reputation in the French development system and we look forward to positive results from Antony. We believe this is the first of many steps for the Antony!  We wish him well,” says Academy Director, Bassam Naim.

ANB Futbol’s vision is to become Canada’s leading soccer development organization. Its mission is to identify Canadian soccer talent, and to maximize the potential of players at any level, through professional coaching and training.

For more information on the programs offered by ANB Futbol, check out our website at www.anbfutbol.com or by telephone 905-313-8661 or email info@anbfutbol.com

Soccer Academy Alliance Canada (SAAC) is the First Standard-Based Player Development Group in Canada. Since 2005, private soccer Academies in SAAC have focused on our primary mission, to systematically produce the best Canadian players in this “beautiful game”. In 2019 and for many years to come, this mission will continue, through quality coaching, best in class facilities and excellent competition, we are excited in our continual journey to develop the best players IN Canada and FOR Canada.

We would like to thank all of our Academies for their participation in the 2018 Ontario Soccer Pilot Project with the OASL.

We at SAAC are proud of the numerous players that have gone on to play professionally not only in North America but also in other parts of the world. We are also proud of sending over 600 players to Athletic Soccer Scholarships at post-secondary schools not only in Canada but also all across the United States. In 2019 and future years, this trend will continue as players will go on trial at European Academies and be offered roster spots on university teams. SAAC teams will participate in scholarship showcases, and a select number of SAAC teams have already been invited to prestigious tournaments outside of Canada.

On behalf of all of our players, staff and our entire Academy ownership group, I want to thank you for your support and look forward to seeing you on the fields this year. 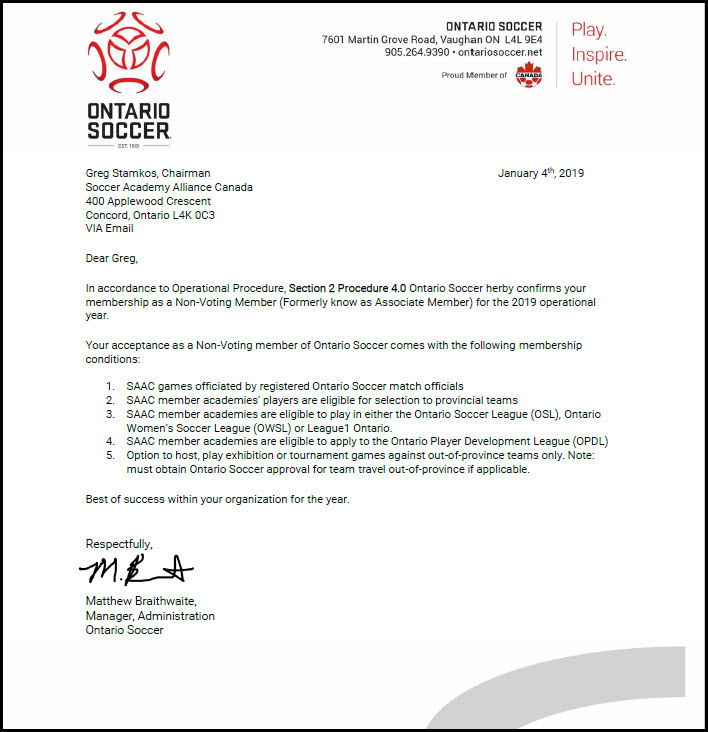 SAAC, established in 2005 with a mission to develop the best possible youth players in Canada on a continual and systematic basis. Our members offer best-in-class training, facilities and competition. In the past 14 years, Academy graduates have gone on to professional careers, trials overseas, NCAA scholarships and Canadian Universities. SAAC has some of the most experienced and educated coaches in the country, with over 75 professionally licensed coaches currently employed by its membership.

Soccer Academy Alliance of Canada is proud to have successfully operate SAAC for the past 14 years. SAAC was the first Standard Based Youth Development League in Canada.

The 2018 Pilot Project proved difficult and resulted in a significant departure in experience for SAAC youth players and their parents, overall. There were many challenges co-ordinating and operating the OASL League consisting of Academies pooling together from 4 different organizations (SAAC, OASL, CAF and some new academies). The 2018 OASL expanded from 13 academies in 2017, to 45 academies in 2018; an increase of 3 times in Academies and a player base toping over 4,500 youth players. Essentially, the player experience changed, the focus on Player Development was marginalized, and the quality standards SAAC founded and operated on for the past 14 years, could not be maintained.

Numerous SAAC Academies approached the SAAC Board of Directors and expressed their disappointment with the OASL 2018 season. A number of them requested to participate in a SAAC League operations structure in 2019 based on the founding standards established by SAAC, 14 years ago. The SAAC Board of Directors met and agreed with the Academies, applied for Associated Members Status with Ontario Soccer, and is now excited to announce SAAC will commence operation in April – 2019; working with Ontario Soccer as an Associate Member.

SAAC will be entertaining additional membership applications through to 31 of January, 2019. See our Academy Membership Inquiries section on this website for details.

We look forward to working with our Academies once again during the 2019 season in order to continue on with our mission in the development the best youth players in Canada.

ANB Futbol is pleased to announce its 10th Annual International ID scouting camp taking place on the weekend (Fri. Sat. Sun.), 29 June – 1 July, 2018, at Markham Sports Dome (Markham, Ontario).  The camp will be open to all players, both male and female, throughout Canada between 12 to 17 years of age.  Coaches and scouts from the following European clubs will be testing, observing and scouting the participants:-

2.    Players who demonstrate the skill and talent to handle a European trial will be approached on an individual basis.

3.    Players who show ability but need additional preparation will be approached on an individual basis.

In the past five years, over 33 players were invited to various trials in England, France, Italy, and Croatia based on their strong showing in the ID Camp.  In 2017, a GK was invited to trial at Le Havre (France).  He then signed an agreement to join the Academy on a full-time basis (http://anbfutbol.com/2017%20-%20Niko%20Curvija.pdf).

ANB Futbol has invited various University coaches from Canada & the United States to join the camp in case there are players who are interested in showcasing their abilities to these scouts.

“In 2018, we are looking at building from previous years, especially on the female side, as we have invited the woman’s program head of formation from Olympique Lyonnais.  Additionally, with the success of signing a player who was spotted at this ID Camp last year, we hope for scouts to see even more talented young Canadian players,” said Bassam Naim, Academy Director.

ID Camp registration is limited, based on a first come, first serve basis.

For more information on this and other academy programs, contact Bassam Naim (Academy Director) by telephone at 905-313-8661 or e-mail at bassam@anbfutbol.com.